Is Your Soul Mate’s Ex-Girlfriend an Issue? 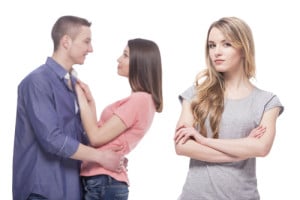 Is Your Soul Mate’s Ex-Girlfriend an Issue?

If their relationship was so great then why is she his ex? Many people have a hard time accepting their part in why a relationship ended. They may have been neglectful, too clingy, too standoffish or just a pain in the ass to be around. The thing is, they thought they were getting away with it. They didn’t change their ways because they thought their bad behavior was being accepted. And maybe it was for a time.
Your soul mate’s ex-girlfriend only has the power to get in between you and screw things up if you both allow it. If the two of you stand strong together, the ex-girlfriend is powerless. You can be mad at his ex-girlfriend for calling at 4 am. But why get mad at him? Unless he encouraged her to call, why is it his fault? He can’t control her actions and he is not responsible for her actions. So don’t take it out on him. What he is responsible for is how he handles he calling at 4 am. If he picks up the phone and talks to her then he is an idiot. Feel free to be mad at him. All that did was let her know she can keep calling at 4 am.
What he should do is block her number and be done with it, and this way she can’t do it again. If children are involved, blocking may not be an option. He still doesn’t have to answer the phone at 4 am. He can wait for her to leave a message, because if something did happen to the kids, she would leave a message. Feel free to be mad at her if she calls you names or disrespects you. But again, don’t fight with your soul mate about it. Unless of course she calls you names or disrespects you in front of him and he does nothing about it. If he does nothing about it he pretty much gave her the green light to do it again. She will feel he disrespected you by not coming to your defense, and you may actually agree with her perception.
No one should ever let their ex become their current partners problem. Your ex, your problem. Your problem, you handle it. So since it is his ex-girlfriend, he needs to handle it. But what if he isn’t handling his ex-girlfriend to your liking? If he is handling his ex-girlfriend properly, then all should be right between you and your soul mate. You should feel like a part of a team and fully supported. If he is not handling his ex properly then she will be able to annoy the crap out of you as much as she likes.
It is up to him to take away as much power from her as possible. If he doesn’t, your soul mate relationship will suffer. Let’s face it, he didn’t know how to properly deal with her in the past, that is why she is an ex, so chances are he is clueless on how to deal with her currently. Don’t expect him to guess what you want him to do. Offer him suggestions, without screaming at him if possible. If he wants to handle things his way, let him know you don’t think that will work but you will let him try. When, of course, she acts out again that is when you let him know his way obviously isnt working and it is time to change tactics. Remind him that you need to be on the same side, and that what she wants is for the two of you to argue. Don’t let her win. Don’t let a past mistake become a present mistake as well.
We all have a past, but that past should stay in the past. How can we expect to have a future with someone when our past won’t let go of us?