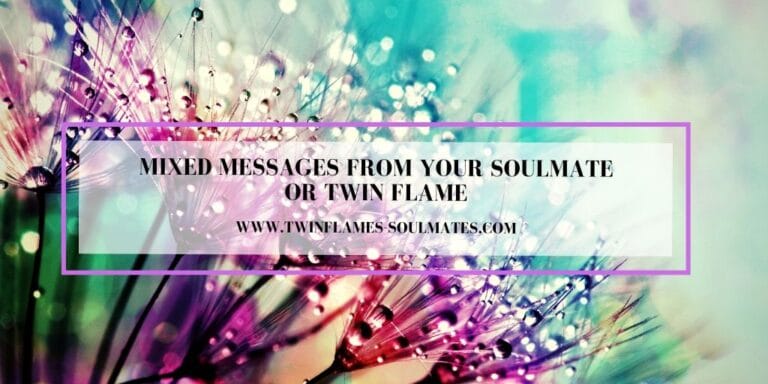 Do you get mixed messages from your soulmate or twin flame? Is the person in your life saying one thing and then saying the exact opposite? Do they do one thing and say another?

Does your soulmate or twin flame fail to verbally express they love you but then do things that make you believe they do? Has someone caught your eye who acts with interest but then acts like you’re invisible the next day?

When soulmates or twin flames send mixed messages it can be frustrating and confusing. You don’t know what to expect, how to act or what to do!  It’s very tricky when someone hides their feelings to know what is really going on. One day you’re on cloud nine because you get a message they care. But the next day it’s opposite and you fall right off the cloud.

Sometimes it’s hard for soulmates and twin flames to express how they feel. They will reach a point where they know what they feel. But they’re afraid of their feelings. So either the wrong words come out or they say nothing at all.

So now you’re surrounded with confusion. Until they can truly understand their feelings they can’t reveal them. It’s time to wait. Don’t worry if they’re saying nothing. Give them some time to sort things out and then see if there’ an improvement.

Sometimes they say very little because they fear their feelings aren’t reciprocated. No one wants to look stupid by going overboard. Now isn’t the time to search for clues or keep score. Soulmates and twin flames feel very deep feelings right way. Not every person is ready to express those feelings right away though.

Words and actions can send mixed signals. Be careful not to allow boundaries to be broken or mistreatment to continue. Everyone can have a bad day sometimes. That doesn’t give someone the right to take it out on you. The goal is to get words to match behaviors.
You can speak with your soulmate or twin flame about it, but that does not always work. Don’t think mixed messages in any relationship is healthy relationship dynamics. They are exact opposites. Mixed messages create an environment of insecurity and make the relationship unable to have a healthy balance.
It could be that you don’t know how to read the messages your twin flame or soulmate is sending you. You could just have a problem deciphering the messages you’re being sent. What if the mixed signals are making you insecure but they’re not meant to? Not knowing can really destroy a relationship or keep one from getting off the ground. It could be a simple misunderstanding and can be resolved with a simple conversation.
If you’re getting mixed signals from your soulmate or twin flame, you may need some outside help. Feel free to contact Sarah Adelle and Sophia Elise to help you decipher what exactly your soulmate or twin flame really feels.