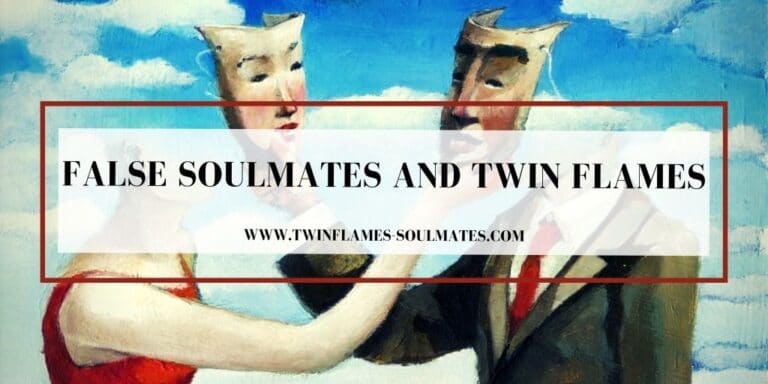 Many people stay in toxic relationships because they believe there’s a connection to this person. So many folks use the spiritual connections they believe they have as an excuse to be treated like garbage. And sadly do nothing about it.

IT LOOKS JUST LIKE A SOULMATE OR TWIN FLAME

False soulmates and twin flames appear in your life by what seems to be a fateful meeting. And it appears all the twin flame signs and soulmate signs are there. They show up in your life with with the appearance that destiny brings them and have many of the signs of spiritual partnerships.

When a false soulmate or twin flame comes into the picture, the pull is very strong. But it’s not a pull from your spirit or soul. It is coming from a very different place. Ever wonder why you keep meeting and being attracted to the same “wrong” person for you, as opposed to finding the right one? It’s because you feel a strong “connection” to people who are wrong for you. Something within yourself needs to heal and change, but you have yet to address it.

FALSE SOULMATES AND TWIN FLAMES DIFFER FROM TRUE ONES

A false soulmate will make you sink lower and lower because they have zero spiritual evolution. A true soulmate or twin flame is a spiritual connection. False soulmates and false twin flames pull one another down. And it’s their weaknesses that keep them together, not their strength. Fake soulmates and twin flames choose to be with people they can drag down to their level. As they deviate them from their spiritual path, the relationship continues to become more and more dysfunctional. They will not choose to get on a spiritual path, as they have no desire to do so. And more than likely never will.

DIFFERENCE BETWEEN FAKE SOULMATES AND TWIN FLAMES AND REAL ONES

1. Lack of balance in your relationship.

You will give and give and get nothing in return except mistreatment. The relationship would have ended a long time ago but it has limped along due to your efforts. You do all the work, they reap all the rewards. And you make all the sacrifices, while they take all the advantages. You never get what you want from them, or the relationship, unless they want it as well. The false soulmate or twin flame makes and enforces all relationship rules.

They will place boundaries on you, but you can’t on them. They alienate you from your friends and family until you have nothing left but them. This makes it easier to manipulate and control you. Some true soulmate or twin flame relationships can get to this point, but they can be changed. But with false soulmates and twin flames, it’s an impossible feat. In the case of a false twin flame or soulmate, no matter what you do, they will not allow balance in your relationship. In the case of real soulmates and twin flames, they will.

2. You have feelings for them, but they have none at all for you.

You feel so deeply for this person, and think it must be mutual, because the connection feels so real. No matter how badly they treat you, or what they say, you believe in your spiritual connection. You imagine you’re communicating your feelings for one another via gestures and other clues, rather than verbally. Sometimes true soulmates and true twin flames deny their feelings for a while.

But there are many times a person really means it when they say they feel nothing for you. Just because you feel a connection, doesn’t  mean it’s real. And it certainly won’t indicate they also feel the connection. A false twin flame or false soulmate can make you feel feelings are mutual. But it’s really a figment of your imagination and a manifestation of you desire. And simply not reality.

You have amazing chemistry with each other, but that’s all you have. They’re there for the sex and that’s all they want from you. You may want more, but they do not. Not all great bed mates are soulmates or twin flames. It’s just great sex, plain and simple. You can try and hang on, waiting to see the day they want more from you. But they never, ever will. You can use the excuse for holding on because of the connection you think you have. But you’re sadly mistaken if you think you will get a long-term healthy relationship out of this down the line.

4. False Twin Flames and false soulmates can be quite manipulative.

When your first meet, everything will be wonderful. They will be on their best behavior and make you think they’re everything you want in a partner. And they make you believe they’re on the same page as you. Their vision of your future together will be wonderful. But once you fall for it, the reality of who they are presents itself.

Now they start to backtrack and take it all back. Now they’re unsure of the feelings they once professed for you, or they will say they don’t feel like that anymore. They wanted you to believe in a spiritual connection between you, when all the time they were playing a game with you. These people love to do this. And they do it over and over again. Once someone takes the bait, they do an about face and usually end the relationship. They may come back around, but play the same game again. Until you stop taking the bait, they may keep playing this game for years, if not decades. They may even have overlapping victims when they play this game.

It’s too difficult for them to maintain a healthy relationship with you. And in truth, it’s not what they want. So when they know you let your guard down, they disappear for no good reason. They will return, only to repeat this pattern over and over again. Because to them, this is a huge ego boost. When they’re feeling sorry for themselves or unloved, they return to take all your love and adoration. And they will drop you again as soon as they feed their ego.

Although true soulmates and twin flames do separate, they can have long-term lasting relationships. False ones are just in it to drain you for their own needs, and really don’t care about you. No matter what they say or do.