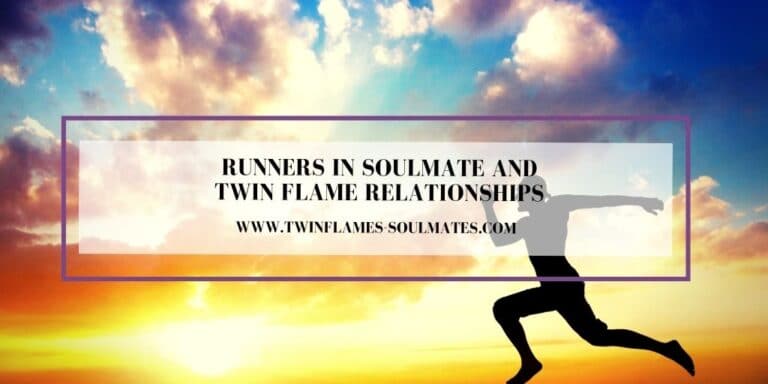 Runners are usually present in spiritual relationships. In soulmate and twin flame relationships, running behavior is one of the stages of spiritual union.

What exactly is a runner? It’s pretty much exactly as it sounds. A runner, or pulling a runner, occurs when someone runs away from the spiritual connection. People do this for many different reasons, but it all comes down to fear manifesting itself one way or another.

The connection between two people, even those that welcome it, is very intense. It can be very uncomfortable with people who are unfamiliar with this level of emotion. Since you really have no idea what it feels like until you finally meet a spiritual partner, there’s no way to prepare yourself.

Even people who are prepared tell us they had no idea how overwhelming and all consuming that connection was going to be.

There rarely is an experience you’ve had before you can draw from. This is entirely new, uncharted territory. This is where and why fear kicks in. At first, the connection feels great to most people. They surrender to it and go along willingly for the ride. And what a ride it is!! Everything is wonderful and they’re both on cloud nine.

But then the fear manifests in many ways. What if this doesn’t last? How can this be real? I shouldn’t care for someone this quickly. It doesn’t make sense. I feel as if I’m out of control, and I don’t like that feeling. What if this person breaks my heart, how can I survive something like that?

These thoughts, and others, set the stage for them to run. They believe removing themselves physically will break the connection or help them regain some control over their thoughts and emotions. It doesn’t. They want to prove to themselves they’re stronger than the connection or prove it’s in not real.

For the one on the receiving end, this is devastating. It’s the worst of the worst. They want to chase after them, beg them, explain to them, or convince them what they have is real. They want to reassure them they would never hurt them. And they want to tell them all about spiritual relationships so it makes sense they understand there’s nothing to fear.

Usually it has the opposite affect and the runner runs even further way. They usually cut off all forms of communication because they’re not ready to listen. That is not where they are on their journey.

Now the one left behind creates fears of their own to mirror their spiritual counterpart. They wonder if there was a true soul connection or if it was one-sided. Will my spiritual partner ever come back? They question if the connection is gone because of what the runner has said or done.

The couple have to learn their own lessons at this point. They must both believe in the connection in order to take a leap of faith to further their relationship. It’s unfortunate that spiritual partners can’t always learn their lessons together. The universe doesn’t choose this route for them. It’s up to each member of the couple.

When someone pulls a runner, the worst thing you can do is chase them. You need to let them go, no matter how scary that sounds. Looking inward will rebuild your faith and purpose in the connection. That’s exactly the same thing runners need to do as well. Don’t focus so much on when they’ll be ready to embrace the connection by returning to you.

That does nothing for your lessons and accomplishes nothing. You need to be strong for the runner and towards the runner. You don’t want them to return only to leave again, and again and again. Letting them slide, or being too understanding of their fleeing behavior, can backfire.

You need to create boundaries and be prepared to enforce them when they return. Understand soulmate or twin flame runners are not a rare occurrence. You are not alone. In most cases, the runner comes back. So please, don’t lose hope.

7 thoughts on “Runners in Soulmate and Twin Flame Relationships”