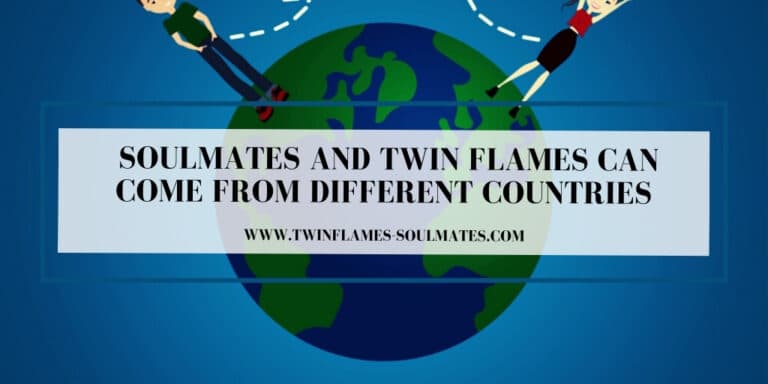 Soulmates and twin flames can and do come from different countries.

Many soulmate and twin flame couples meet while they’re both living in different countries.

Now this is very different from the scammers on internet dating sites in a different country who constantly ask for money before they even meet you. We’re talking about couples who meet while one was on vacation in the other’s country or any other reasonable scenario. Soulmates and twin flames can meet anywhere at any time.

These connections really face a lot of challenges but the bond is something they cannot escape. They’re aware of the fact that most of their relationship, after their initial meeting, will be via phone or Skype.

They know they will not be able to spend every weekend together and they may not be able to see each other often. If it were just a person they found attractive, they may just let it go, knowing the relationship may not really have a future.

When soulmates or twin flames meet, geography doesn’t matter. Even though they may both wish for an easier, more local relationship, they feel they have to give it a chance. They’re willing to pursue a long distance relationship for a while until they can live on the same continent.

That is another challenge as well. It’s hard enough to relocate to, for instance, another city or state, if you live in the USA. It’s much more difficult to relocate to another country and live there permanently.

Of course, the ultimate goal of soulmates or twin flames from different countries is to live in the same country. Before doing so, make sure the relationship is mature enough. Don’t let the fantasy make you forget about the reality of the situation.

One person will be leaving their family and friends and that’s a hard adjustment. They will also be changing jobs and taking a real leap of faith. You shouldn’t take a leap like that unless you’re both sure of what you are really getting into. If you take the process a bit slower, rather than jumping the gun, you can avoid putting more strain than is necessary on both of you and the relationship.

It’s really difficult to have a soulmate or twin flame from a different country, but it can be done. Let your logic and reason make the plans. Let your connection give you the strength to make those plans come to fruition.