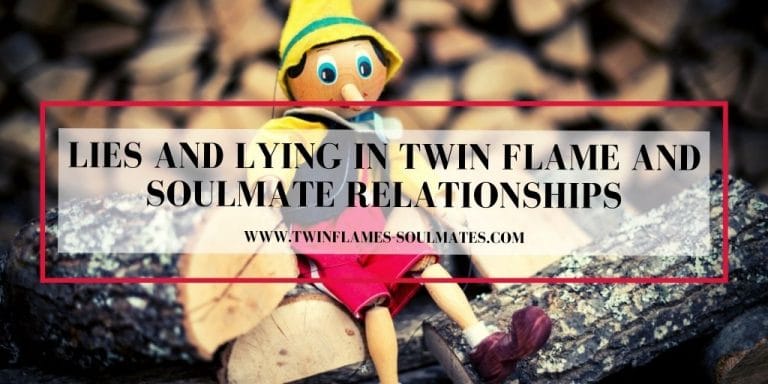 Lies and lying does happen between twin flames and soulmates.

Are you sick and tired of not believing a single word they say?

Although you wish you could trust what your soulmate or twin flame says, they fib so much you simply can’t? And it’s not just about the big stuff either.

Some soulmates or twin flames, like everyone else, find their partner will lie about almost everything!

So what can you do when your soulmate or twin flame is deceitful and their word means nothing?

First we must acknowledge that we’re all guilty of telling a fib here and there. More often than not, we do so to spare someone’s feelings. But someone who lies all the time isn’t just a pathological liar. In some cases, they use it to manipulate people. It isn’t a random thing and there’s a method to their maddening behavior.

Let’s say your partner constantly makes promises to you they never intend to keep. They promise you that if you do X for them, they will do Y for you. Once you fulfill your obligation, they never follow through. This is dishonest. They said what they felt needed to be said, even though it wasn’t the truth. All to get you to do what they want you to do. It works out great for them so that behavior can become a habit.

The way to turn the tables on a partner who is dishonest is to make them do what they promise first. And until they do, don’t give them what they want. Explain to them that they never follow through on their part of the bargain. So now they have to put up or shut up.

You’re tired of their lies and excuses. They won’t like you figuring out their manipulation tactics, but who cares? As long as it stops the dishonesty and manipulation, it’s all good. And it’s best to nip it as soon as possible because one lie often becomes many.

LIES AND LYING BY OMISSION

Many people don’t consider lying by omission to be true lies, but they are. For example, they won’t tell you their ex called or that they forget to run the errand you asked them to. When you find out the truth, their lame excuse is that they didn’t want to have a fight or make you mad.

Ask yourself honestly, do you go postal when they tell you the truth? If you do, you may have to tone it down so they can no longer use this excuse. However, if you know you don’t fly off the handle, you need to explain to them that keeping things from you, actually makes things worse.

Try and reach an agreement that when they tell you the truth you’ll discuss things as calmly as possible. When they choose to lie instead, they need to expect consequences far greater than if they told the truth.

When you hear your twin flame or soulmate lie, you need to confront them head on, or it will break down trust in your relationship. Trust is so hard to get back once it is betrayed. They may not seem to understand this, so you have to make them.

If needing your partner to be honest is important to you, you need to show them. Your actions will speak louder than their lying words.