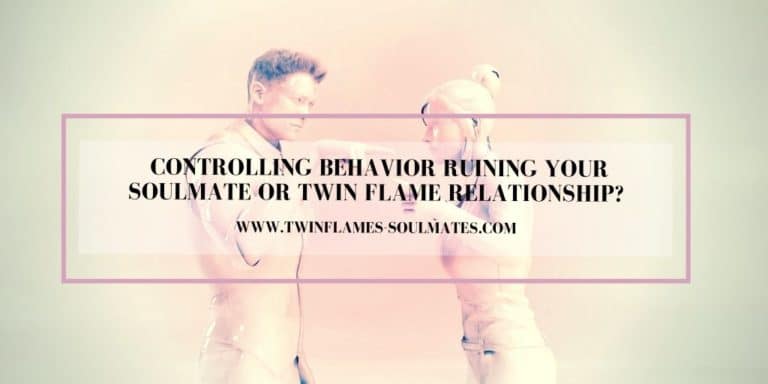 Controlling behavior often pops up in soulmate or twin flame relationships. Since the connections are out of anyone’s control, it is easy to see why the desire to control something is so prevalent.

Controlling behavior ruins a relationship. A person who feels the need to control a relationship often finds themselves alone in the end.

At first, the desire to control can be manipulated to look as though you’re doing something because you love someone, or want what’s best for them. After the initial honeymoon phase ends, and the controlling behavior takes over and becomes more predominant in the relationship, the person being controlled gets sick of it.

Controlling behavior, and the need to control another, comes from the controller’s insecurity. Soulmate and twin flames are often insecure because they have never been in a relationship like this before.

A man may be very insecure, and because of that, not treat the woman he loves very well. Instead of working on his insecurities and treating her better, he decides to try and control her.

Because he is jealous and insecure, he wants to control how she dresses. He wants to decide who she hangs out with, and if she wears makeup. He may also try and keep her away from her friends and family, because it is easier to control someone when they’re isolated.

Women do this too, by the way. They may try and keep the man they love from his friends and family, and even his children.

This is not about love, but about selfish, insecure control. And it’s dysfunctional, and based on weakness, not strength. Sure, if you don’t want your spiritual counterpart to hang around an ex, that makes sense. But if you’re trying to keep them from every member of their sexual preference that’s childish, immature, and unreasonable.

We understand you don’t want to lose your soulmate or twin flame. We get it. But by being too controlling, there is a good chance you will.

PEOPLE WHO NEED TO CONTROL THRIVE ON DRAMA

People who practice controlling behavior are often Drama Queens or Kings. Believe it or not, soulmates and twin flames do drama very well.

If you do something innocent, like meeting your friends or family members for lunch ,you’re doing nothing wrong. So you shouldn’t be uncomfortable the entire time because you’re afraid of what they will say or do if they find out. Why the hell shouldn’t you be able to enjoy lunch with your friends instead of worrying about how they will react?

What you don’t realize is that by trying to keep the peace, and adapt to their controlling nature, you are making them worse. The relationship has no future.

You need to look at the root of the insecurity. Where is it coming from?  Is your soulmate or twin flame actually doing or saying something that is making you insecure? Is it an issue from your past that you have not resolved?

Once you know where it is coming from, you can begin to let that insecurity go. It takes work and that work takes time. Don’t think that if you’re in a long-term relationship that the insecurity will disappear by itself. It won’t. The time is now to let go of the controlling behavior in your relationship.

If you need help on your individual situation, feel free to contact Sarah Adelle or Sophia Elise for a private reading via click4advisor.