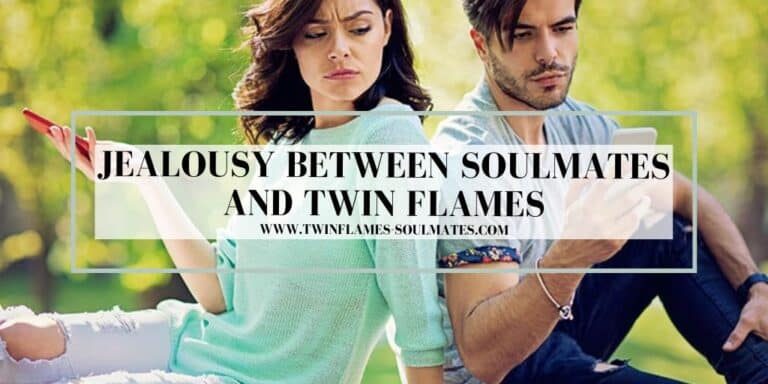 Jealousy for soulmates and twin flames, like any other couple, can ruin a relationship.

Jealousy stems from insecurity, and insecurity can contaminate a relationship. Just because you’re in a spiritual relationship doesn’t guarantee it will be drama free.

Jealousy for soulmates and twin flames can be pretty commonplace.

Why? Because it’s one of the more popular lessons people need to learn. Insecurity can come from past relationships, both with family and past lovers. Some people haven’t yet freed themselves from their fears of abandonment. Past hurts can be why many soulmates or twin flames have difficulty dealing with their jealousy.

Jealousy is something that must be addressed, and not accepted. It’s not to be enabled. If your soulmate or twin flame is having a problem with feelings of jealousy, it’s not your problem to fix it. It’s theirs. So don’t excuse it and don’t take it as a compliment. It’s not a validation of how much they love you.

If you’re purposely trying to make them jealous, you need to knock it off. Other than that, you need to demand they get their jealousy under control. Put your foot down and let them know you won’t tolerate it.

Words may not be enough. You may have to separate for a while. Yes, that’s a scary thing to do, however, it’s important. Jealousy will erode the foundation of your relationship if they don’t get it together. Don’t let them do that. Make them do the work.

What if you’re the jealous one?

Then you need to look at your own insecurity. This is part of your lesson to learn, to help you grow and shed this trivial emotion. It could be your insecurity stems from a past relationship or with your family.  Or is it just something you’ve had an issue with for as long as you can remember?

Regardless of why your insecurity causes you to become jealous, you need to change your reaction to that feeling when it comes on. Don’t act or react to it when triggered. Try and let the feeling pass.  And in doing so you can avoid the drama and problems that will certainly come with your jealousy.

Jealousy is not flattering. It can make someone feel accused of something they’re not doing. No one appreciates that. Your jealousy comes from fear. Either a fear of losing your soulmate or twin flame or them not loving you anymore.

When you keep driving your partner crazy, making them angry with your jealous antics, eventually you can lose them. At that point they won’t feel the same way about you. The connection will still be there but that may not be enough to fix what you’ve broken. So why behave in a way that will make your greatest fear manifest?

You can’t keep your soulmate or twin flame from talking to, or working, with members of the opposite sex. That’s not the problem. The problem is how YOU feel and how YOU react when they do. That’s your responsibility. And it’s up to you to get your act together and get on a spiritual path.

You need to work from a place of faith. Yes, you have met the love of your life. But no, that doesn’t give you permission to behave like a jealous, insecure person.

IF THEY’RE DOING IT ON PURPOSE

Now, if your soulmate or twin flame is purposely doing things to make you jealous, that’s another thing. It doesn’t mean you should fall into their trap. They’re doing it for a reason. And again, that’s their issue to fix. Talk to them about it. But if they keep doing it, step away from the situation. Show them there’s a consequence to doing that to you.

They want you to feel jealous, for whatever reason. So if all you do is act jealous, they win. And when they manipulate you to react with jealousy, they get an ego boost. They also will attempt to turn it all around and make you the bad guy.

Don’t fall for it. Don’t allow your fear of losing them keep you from setting proper relationship boundaries. And make sure to enforce them with words and consequences to their actions.

Jealousy shouldn’t be part of a spiritual relationship. Sure, we’re all human and can get jealous here and there. And that’s fine. But if you’re part of a twin flame or soulmate love triangle, or any other situation where you find yourself being jealous all the time, it’s time to make a change.

4 thoughts on “Jealousy for Soulmates and Twin Flames”