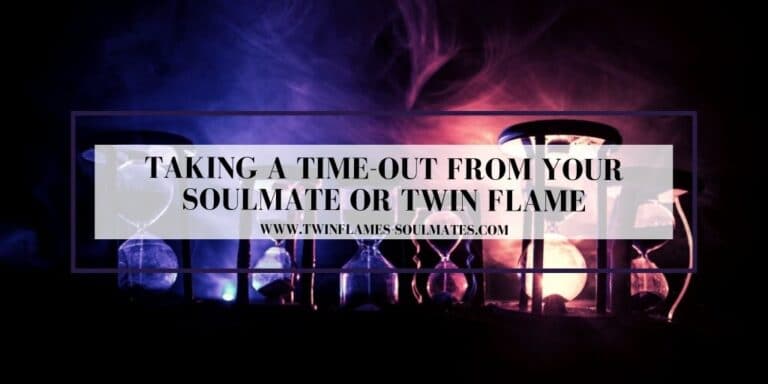 Taking a time-out from a twin flame or soulmate is a great way to push a reset button on your relationship.

Perhaps your twin flame or soulmate (choose your own label) relationship has gotten way out of control. You may be fighting about the same issues over and over. You may feel stuck and feel like you’ve tried everything but nothing seems to work.

So taking a time-out from a twin flame or soulmate may be just the thing the relationship needs to get it back on track. It may sound drastic and it may feel terrifying, but taking a time out from your soulmate or twin flame could be the best thing you can do

Everything is extreme when it comes to twin flames and soulmates. The love and affection are on a higher level, and fighting can be just as intense. So when they’re at odds, it could be a very good idea to go to separate corners for a while.

When spiritual couples take a time-out, they shift gears from wanting to hurt one another to missing one another. They need those feelings of anger or hurt to die down and love to surge again.

When spiritual partners fight they can act like bitter enemies. Their behavior and words can be hateful. When they take a time-out they usually soften within days. Then they want their time apart to end. They feel the pain of being apart and realize that fighting was over something stupid. It dawns on them that they could actually lose the love of their life if they don’t change.

When should you consider taking a time-out from a twin flame or soulmate?

When they’re acting disrespectful, argumentative, irrational or childish. If you can’t reason with them, or they’re looking to fight, then leave them alone. Let them know you aren’t going to be around them when they’re acting this way. Instead of letting them wind you up over something stupid try taking a time-out. This can also keep you from reacting in ways you will regret later.

There are times when your partner is obviously looking for you to sink to their level. Nothing good will come from that. Don’t go there. Do something constructive instead of destructive. Set a boundary and enforce it without fear.

Many people are terrified that a time-out will lead to a permanent break up. This is just silly. Do you think a time-out will do more damage than is being currently done? Do you really think they will stop loving you simply because you won’t put up with their nonsense?

Love doesn’t work that way. Do you really think they will get over you and find someone else? In a few days? Again, that’s just silly and melodramatic. No one falls out of love and in love with someone else in a matter of days.

So put your fears aside and do the right thing. Emotions aren’t changed with the flip of a switch. Your feelings for them didn’t change all the times that they did something wrong. So why would their feelings for you change simply because you refuse to put up with being disrespected? It makes zero sense because it’s not how emotions work.

If you’re giving your soulmate or twin flame time-outs constantly then there’s clearly a bigger problem. Some people use time-outs as power plays and to create an on/off situation.

That is relationship dysfunction 101 and not a good idea at all. They may also do this so they can go back to an ex or to keep your relationship from going to the next level. Taking a time-out is not about freeing yourself to spend time with another member of the opposite sex.

When giving a time-out, do so in a calm manner. Be as calm as you can. It should be short and sweet. It’s not a conversation. If it’s during an altercation, simply say “I am not going to be a party to this” and leave, or tell them to leave.

If it’s about another issue that you cannot resolve then tell them it would be a good idea for you to take some time apart. Say that both of you need some time to think and get your priorities straight. Let them know how long you will be gone or for how long you want them to leave.

Remind them this isn’t the end of your relationship.

This is an effort to make things better. Let them know you will be thinking a lot about things. Tell them you both need time to get your heads together and your hearts in alignment. Explain to them you’re doing things for the good of the relationship, not to hurt it.

Agree to not have any communication until the date you agree on. Make a plan to meet for lunch or dinner on that date. A time-out may be just the thing to give your soulmate relationship a much needed reboot.

If they react to this in a heated or unkind way, then cut your statement short and fill in the blanks with them at a later day. If this happens, of course, wait for them to contact you so you know they’re receptive to what you have to say.