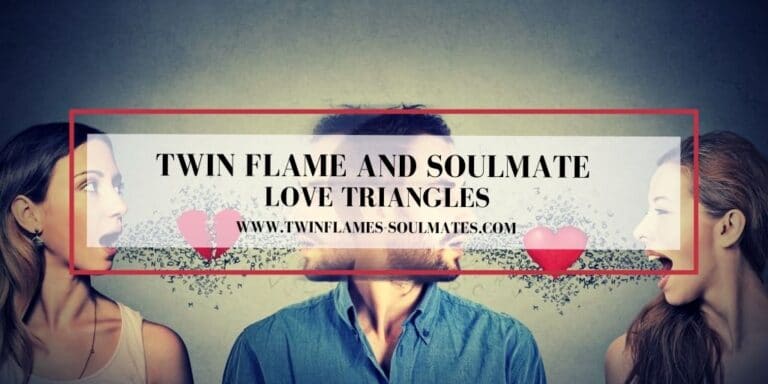 Twin flame or soulmate love triangles are more common than you can believe. And it’s unfortunate relationships on a spiritual path become entangled in scenarios like this.

Someone can encounter their twin flame or soulmate while they’re currently in a relationship. It happens all the time! The one in the relationship could actually love their partner and wish them no ill will. There’s not a connection to that partner in the same way as with a twin or soulmate. It’s a whole different ball game.

So why is it that so many twin flames and soulmates meet while currently in relationships? For starters, they usually would never leave their current situation if they didn’t. They’ve been in a relationship that has been wrong for them for far too long. So for whatever reason, they find it difficult or impossible to leave on their own.

Then the universe decides it’s time to step in and give that person some support. They show them what the right relationship feels like for them. It gives them hope for the future, knowing their lives could be different.

They’re being given the chance to change their lives in a big way. And they should take a leap of faith and trust the plan. One would think that someone who has been miserable for so long would jump at the chance to something better. But usually they have one foot in with their spiritual partner while the other foot is stuck in the old relationship. This is one way to create love triangles.

The old relationship should be given up for the spiritual union. But instead, for different reasons, there’s an attempt to hold on to both relationships. This behavior causes so much drama and ill will. Trust issues and bad dynamics in the relationships are created. It’s never a good idea to let a scenario like this keep playing out. Nothing good will come from participation in a soulmate or twin flame love triangle.

SPIRITUAL RELATIONSHIPS CAN BE DIFFICULT

Being involved in a spiritual union should be the easiest of all relationships. In truth, it’s one of the hardest. That’s the bad news. The good news is that soulmate and twin flame love triangles actually do have a purpose. Each couple often have bad patterns of behavior to release. Quite often those revolve around previous relationships or their relationships with dysfunctional people.

When a soulmate or twin flame comes around, instead of running away and leaving behind their bad relationships, they have a hard time letting go. It’s not because they love this person so much. It’s more about resisting change. It stems from being accustomed to negativity in relationships. It feels familiar. Fear of the unknown, and what could be with their soulmate or twin flame, is often more terrifying to them than staying in a dysfunctional relationship.

They only know how to sabotage it and create yet another bad relationship. This is where a soulmate or twin flame can help them learn their lessons. Once they do, they can change their patterns of behavior and move on to a good healthy relationship.

STAY ON THE SPIRITUAL PATH

People who are on a spiritual path don’t engage in, or stick around, dysfunctional relationships. They know better, will disengage and walk away. They won’t reduce their behavior to lower levels. Soulmates and twin flames often detour off their spiritual path and do the wrong things in their relationship. They use the connection as an excuse to behave in ways that are not exactly spiritual.

The universe doesn’t create connections to encourage people to behave this way. The reason they do is so they will have the strength to not only rise above it, but to pull their partner up with them. It was never meant for one to drag the other down with them. Twin flames and soulmates have the same fears and insecurities as everyone else. In most cases it’s the fear that pushes soulmates and twin flames to do the wrong things.

Fear will make soulmates and twin flames put up with bad behavior rather than stand up to it. Those same fears will make them choose to put up with much more than they should. The universe does not want anyone to lower their standards at all. If you’re currently in a situation like this, it’s time to have faith and get back on your spiritual path.

12 thoughts on “Love Triangles in Soulmate and Twin Flame Relationships”