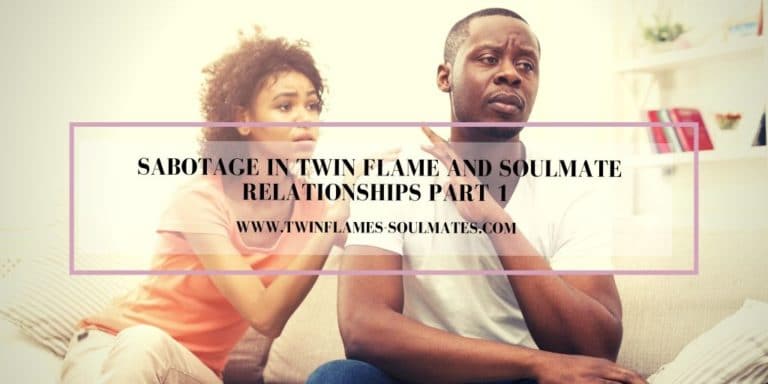 Sabotage can happen in twin flame and soulmate relationships. It happens all the time. When twin flames and soulmates meet, rarely do they both have the ability to handle the connection at the beginning of their relationship. No matter how prepared you may think you are, you aren’t. Even those who have dreamed about and obsessed about finding their soulmate or twin flame have had a hard time with it at first. When most soulmates or twin flames meet for the first time they are usually at different levels of their spiritual growth. All of those things, and more, set the stage for sabotaging the relationship

But why would a soulmate or twin flame sabotage the relationship? Picture it like this. Say you were at an amusement park, and there is a ride that is completely hidden from view. The sign only says that it will be a wild ride, but there is no further description. There will be those that will get on that ride, because the unknown is nothing they are afraid of. It actually adds to the excitement. Others will take a pass on the ride because they have no idea what will happen on the ride and how it will end.

It is the same with spiritual relationships. Some people are excited to take the ride that their spiritual connection brings with it. On the other hand, there are those who will be too frightened and either refuse to get on or will want to get off along the way. So think about those soulmates or twin flames that got on the ride. At first it seemed great, they loved the whirlwind and were eager to continue. But then they got spooked.

They began to worry what was coming around the next bend and became afraid and uncomfortable. They started worrying, and thinking too much, and then decided it was all too much for them. Rarely do they explain to their partner what they are experiencing. Instead the tendency is to sabotage the relationship. They will give their soulmate or twin flame a ridiculous reason for ending the relationship. It is almost always lame and rarely makes for a good enough reason to end a relationship. This is an example of relationship sabotage, plain and simple. If this happens to you, recognize it for what it is.

It is hopeless to debate them on their lame reason, because it is not about that. It is about their fear of continuing on your soulmate or twin flame journey. Don’t blame yourself, it is not your fault. In 90% of these cases, in our experience, they will put the blame on their partner. Understand what this is and deal with it accordingly. They have chosen to get off their spiritual path for right now. They lost faith. Although it sucks, it is survivable, and rarely is it the end of your relationship.

SABOTAGE BY DENYING THE CONNECTION

Another way soulmates or twin flames can sabotage your relationship is through their denial. The connection comes into question for them at some point. At that point they decide to prove to themselves and whoever else that the connection does not exist.

This is especially tough to go through if you are on the receiving end. They will lie and say they have zero feelings for you. They may say they never loved you. Anything meant to minimize or negate your connection can and will come flying out of their mouths. This is all a part of their effort to prove the connection doesn’t exist.

They will block you everywhere and may even ghost you. On social media, phone, email, everything. Again, do not focus on what they said or did and now make yourself question what really happened between you two. It is understandable if you, but it is the wrong thing to do. You are not insane. You were a witness to it all. It was not a lie. Do not allow them to brainwash you. Sadly, you have to let them go and find their way back by themselves. When a soulmate or twin flame acts like this, chasing them is the worst thing you can do.

Read Part 2 of this article here.

Have you been in a twin flame or soulmate relationship where one of you sabotaged it? We would love hear your experiences in our comments section.