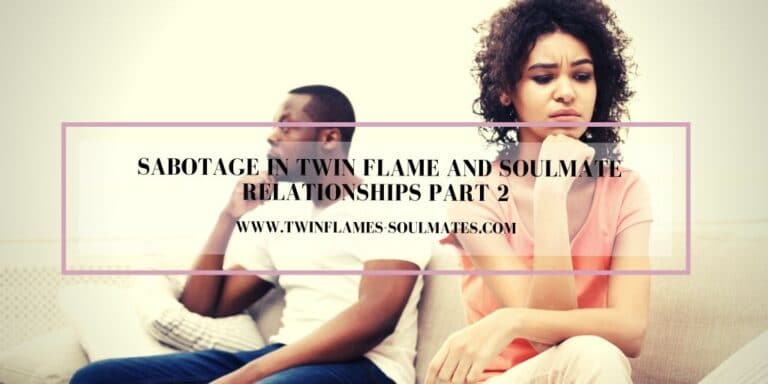 Soulmates or twin flames also can sabotage a relationship by involving a third party. This third party is often an ex boyfriend, girlfriend, husband or wife. This ex is also always someone they told you they cannot stand. Yet as the spiritual connection reaches new levels, they often sabotage your relationship by going back to them.

SABOTAGE BY GOING BACK TO AN EX

This creates an on/off dynamic. And if left too long, it is beyond difficult to break. This is one of the most destructive ways to sabotage any relationship. The relationship really cannot move forward or even build a strong foundation. So much precious time is wasted on this drama.

Why do they do this? For many different reasons actually. But at the base of all of them is fear. They know in a spiritually connected relationship they could screw up royally. In a dysfunctional one, they know the ropes and can blame the other party. They know in a spiritual relationship they will be held to a higher standard. And they do not know if they can sustain it. They are afraid of failure with something this important.

You might wonder well then why would they go back to something they know is so awful. Wouldn’t that be considered a failure as well? The answer is to them, is that it is completely different. With their past relationship they know it is going to fail. They do not believe or hope it will work out. They know it won’t. So there is no fear of failing. Because that is exactly what they expect out of it. Nothing more, nothing less. But with the soulmate or twin flame relationship, they hoped for and wanted it to work out. It may sound illogical, but that is how they see it.

So, since the consequences of their behavior or words don’t fall on them, they continue doing it. Their partner is the one suffering, not them. Sure, they hear them complain or get the silent treatment but in their minds if it was really that big a deal, the consequences would be a big deal. So consider that when you are reacting to your soulmate or twin flames bad behavior. Don’t send the wrong signal.

If it is a big deal, do something to show that it is. Forget saying something, that is never enough. There is another dynamic that is close to this, but the reason for doing it is completely different. Their are some soulmates or twin flames that want to keep testing the connection and their partner. These people keep testing boundaries, their partners patience, and the love of their partner. Because they do not believe someone can love them unconditionally, they do this in an attempt to finally believe it.

This is not the way to go about it. This will never give them what they are looking for. The only thing this will give the both of you is a relationship that is dysfunctional and off the spiritual path you were both meant to be on. Faith has to be at the core of a spiritual relationship. Your soulmate or twin flame needs to take that leap of faith instead of sabotaging your relationship.

You can read Part 1 of this article here.