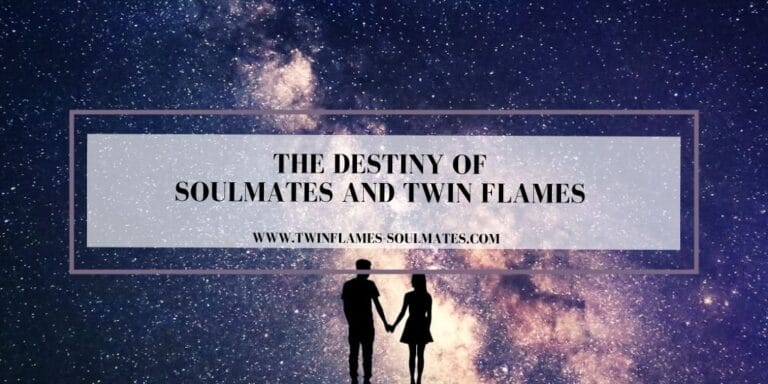 Soulmates, twin flames and destiny are often thought of as working in tandem.

All spiritual relationships and destiny are strongly intertwined. The universe creates soulmate and twin flame couples as well as their connection.

Then the universe creates the destiny which allows their paths to cross. This usually in some strange and unexpected way.

So destiny allows them to stay together forever. Right? Wrong!

DESTINY ONLY DOES SO MUCH

Relationships between soulmates and twin flames have a certain magical, mystical feel to them. They seem meant to be, because they can’t imagine their lives without each other. They believe they will never feel for anyone else the way they feel about their divine counterpart.

Of course they must stay together, it’s destined, isn’t it? Why else would the universe make such a wonderful bond between two people only to have it broken? What would be the point? Since when is the universe so cruel? Doesn’t true love always conquer all?

If you love someone enough and they love you, doesn’t it always work out somehow? Nope. It sure doesn’t. Soulmates and twin flames know that just as well as any other couple. Why? Because just like every other couple, destiny does it’s part.

Then destiny goes on to other things. Destiny may pop back in here and there, but it doesn’t always play an active role. The universe and fate give the responsibility of the outcome to whom it really belongs. And that’s to the two soulmates or twin flames in the spiritual union.

AND THEN IT’S UP TO THE COUPLE

Hey, the universe did its part. It creates what could be an amazing couple. The love is strong, the chemistry is out of this world and the sex is mind blowing.

Destiny makes sure these people find one another. It creates something unique and special and allows two people the opportunity to have a fabulous relationship, grow as people and learn valuable lessons. Then it steps out of the way.

So of course the couple could do just that. Why wouldn’t they?

Because they are human.

Humans don’t like change and often resist growth. So instead of taking this valuable gift and cherishing it, they treat it like trash. They act as if they don’t want it, don’t need it, and may even abuse it.

They may run away from it or try to avoid it completely. It’s up to them. So don’t blame destiny if it doesn’t work out.

The responsibility lies with those given the blessing of meeting their soulmate or twin flame. You must both play your part in making this relationship work out. No one should have more weight than the other in making it work.

3 thoughts on “The Destiny of Soulmates And Twin Flames”