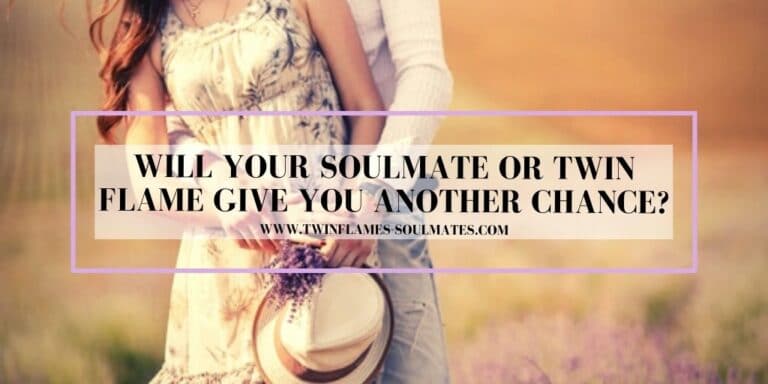 Will your soulmate or twin flame give you another chance?

Soulmates and twin flames tend to be more willing to take a chance on a relationship because of the deep connection.

They will be more forgiving of their soulmate or twin flame because they have more to lose. They’re willing to look past more than they would another relationship.

So your soulmate or twin flame will be more prone to give you another chance because you are not easy to replace.

GIVE IT SOME TIME

Even if they don’t want to talk to you or see you right now, they may give you another chance down the line, because your connection is hard to forget. The bar is set so high with soulmate and twin flame relationships that other relationships can’t measure up.

Of course, your chances increase and decrease depending what you did in the past. Your soulmate or twin flame could have ended your relationship without any good reason. They may have been in denial of your connection.

Perhaps they resisted it, and the only way they could deal with it, was by not dealing with it at all. It’s surprising how many soulmates and twin flames reunite once the runner is ready. Now they’re willing and able to embrace the connection and give the relationship a second chance.

Your spiritual partner may have blown a small thing out of proportion, ending your relationship for something rather trivial. If that’s the case, more than likely there’s something else going on within them. They were probably  just looking for an excuse to pin the break-up on you.

It may be hard, but instead of trying to force them to give you another chance, it may be best in some circumstances to leave them be to work things out on their own. They don’t want you around at the moment, and you have to accept that for now.

If you want them to give you another chance, you may need to give them the option to make some changes for themselves first.

Sure, it’s harder to end a soulmate or twin flame relationship and many people are reluctant to do so. They usually stick around because they hope things will get better. They hope you will change and treat them with love and respect.

At a certain point you may wind up convincing them you’ll never change, even if that wasn’t your intention. At that point they no longer believe you really love them. If you keep acting badly, eventually they will believe just that and then they lose all hope.

Once a soulmate or twin flame’s hope is gone they no longer have faith in you.

They lose faith in your connection and the only thing left to do is to cut the cord. Perhaps they’re tired of waiting for you to leave your other relationship. Your excuses not to be in a real relationship with them, now fall on deaf ears.

So now they no longer care that you work all the time. It doesn’t bother them that you have no time to spend with them. They are weary of the fact that everyone else in your life comes before them. Sure, you may have excuses, but who cares? Not them.

Even if you begged them for another chance they no longer care enough to give you one. You have changed their opinion of whether or not you possess the ability to make them happy. You thought you could get away with it forever, but you didn’t.

Not all soulmate or twin flame relationships last forever. If you don’t treat them right, they may walk out of your life as suddenly as they appeared.

2 thoughts on “Will Your Soulmate or Twin Flame Give You Another Chance?”