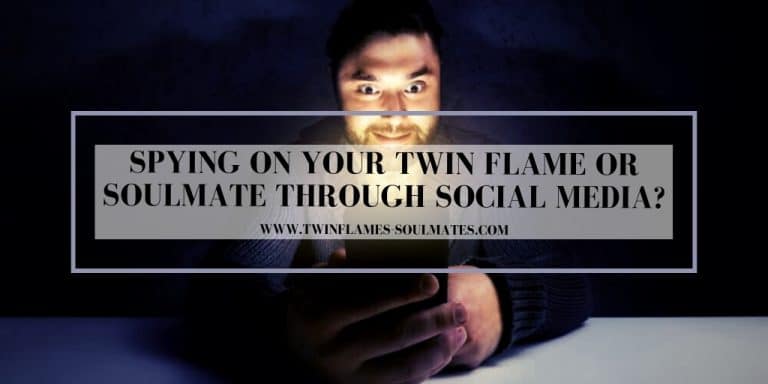 Spying on your twin flame or soulmate through social media can be tempting, but probably not something you need to be engaged in.

Does spying on your twin flame or soulmate make you feel closer to them or further apart? Does this behavior really benefit your life, or state of mind, in any way?

Most likely it does not.

And this behavior often causes more misunderstandings and problems than we can begin to enumerate. If you’re spying on your twin flame or soulmate on social media, obviously there is a bigger issue already in your relationship. And spying on them on social media won’t remove the problem, but only add to it.

SPYING ON YOUR TWIN FLAME OR SOULMATE IS NOT NECESSARY

First and foremost, twin flames and soulmates don’t need to engage in this type of activity. They may have periods of separation, but they don’t need to stress out about them. There’s no need to be insecure and they can have faith the period of separation is temporary. When souls are evolved, the stress goes away.

At times they may not have enough faith in themselves or their partner. They lack the faith in their connection to rise above stress and insecurity.

In a highly spiritually evolved relationship they wouldn’t find themselves stalking social media accounts. Without having learned their lessons it’s a completely different story. So they often stalk social media, and every other way they can think of, to find out what’s going on with their spiritual partner.

Because they chose to feed their insecurities rather than address them.

They’re not trying to rid themselves of insecurity, instead they choose to feed it. They may feel the pull to do it, and think it’s their intuition or their connection.

It’s the loud voice of insecurity and fear talking. Once in a while a soulmate or twin flame may feel a pull to stalk one time here or there. But we’re addressing a constant need to do it.

Sometimes people play games on social media. Actually, most social media is fake and game playing. Very little of it is reality. And it’s never the whole story or picture.

And some people use social media to play games with their soulmate or twin flame. They may try to make them jealous so they post messages with hidden meanings.

But if you’re on a spiritual path you wouldn’t engage in this behavior. And if your soulmate or twin flame is engaging in this type of behavior, they have clearly gone off their spiritual path. Don’t follow them down that road. This type of nonsense is not worth your time or energy. It’s actually part of the problem.

How can you fix anything if you can’t come right out and say it? Why would you post things to piss someone off rather than talk it out?

Social media is not the place to air out your private issues, although many millions don’t have an issue with doing so. To get to the truth, get it from the source, not social media. If you want to fix things, meet in person, not on Facebook.

If you want to talk, speak to one another. Don’t do it through social media. Most relationships would be better off if both parties just deleted all their social media and dealt with the real people in their lives.

8 thoughts on “Spying on Your Twin Flame or Soulmate Through Social Media?”