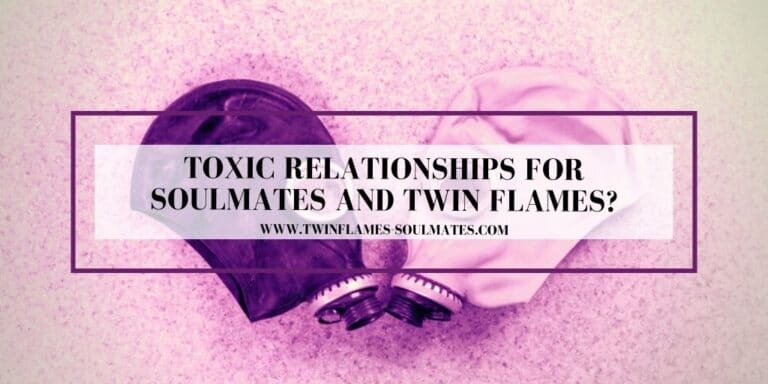 Depending on your belief of what soulmates and twin flames are, some people believe that drama and unhealthy relationship behavior are par for the course. We do not believe this to be true. However we will use both labels of twin flames and soulmates for readers to choose what label they identify with according to their beliefs.

The universe creates all spiritual connections, such as twin flames and soulmates, karmic relationships and kindred spirits. What the universe doesn’t create is the quality of the relationship they have with one another. The free will of both parties creates the relationship between them.

No one member of a spiritual union can do it alone, the other must enable or allow it as well. The connection itself does not a healthy relationship make. The responsibility lies with each of the partners. Don’t blame the universe for dysfunction. You and/or your partner need to take ownership of what your relationship has become.

So how do soulmate or twin flame relationships become toxic? Simple. By allowing bad behavior to continue, and by being afraid to create healthy, proper boundaries and to enforce those boundaries. Do you allow your spiritual partner get away with things they shouldn’t? Well congratulations, you just took the first steps on your way to a toxic relationship.

Do want to allow fear instead of faith to dictate how either, or both, of you behave towards one another? That’s going to bring toxicity into your relationship instead of a creating a healthy one. It’s not the universe’s job or responsibility to honor the spiritual bond between the two of you.

That is on the two of you. You will get what you put into it. Soulmate and twin flame relationships are all or nothing relationships. You want to put in fear, insecurity, and enabling? What do you think you will get for that? Strength, security and a healthy foundation?

Of course not. You will get weakness, acting out, and more drama and dysfunction that you can handle.

Instead of allowing past relationship baggage to tarnish this one, they learn from it. They work on their issues, rather than force their partner to have to deal with them. They expect more from themselves and their partner, by not allowing them to get away with anything they wouldn’t let anyone else get away with!

Their standards have risen, they haven’t been lowered. There is no need to act out or test a soulmate. They don’t deny the connection they share, they embrace it. That is why their relationships are healthy, happy and balanced. When they use their connection as an excuse to let their partner treat them horribly, their relationship instead gets more and more toxic over time.

By embracing lessons, without pushing their partner away, they keep their karma clear.

They often ask for support and help from their spiritual partner to help them learn their lessons and willingly return the favor. They work together as a team. This helps each one of them grow and evolve in a positive way, so  as a couple they become stronger.

Healthy soulmate and twin flame couples don’t let outside influences get in the way of their relationship. They are a united front and they don’t shut each other out. If they let outsiders divide them, the relationship is filled with more drama than anyone needs.

If you’re in a toxic relationship you’ll never be able to do anything right and your partner believes they’re ALWAYS right. It’s always their way or the highway. Nothing is ever their fault, it’s always yours. They expect no punishment for their behavior. But they’ll punish you in ways you can never imagine, for the most minimal offense.

The punishment never fits the crime. Any minor infraction will get you life without parole. They can do something terribly wrong, but they will never accept responsibility or punishment of any kind.

Toxic behavior shows itself in many areas of a relationship, such as:

If they affect your daily mood by how they act or what they say, your relationship is toxic. They think your mood should reflect how they feel on any given day or they decide how you should feel that day. You walk on eggshells never knowing what could set them off.

If your relationship is a secret from those closest to you, it’s toxic. If fear of judgement, shame, and not wanting to hear the truth, keeps you from telling the truth about your relationship, it’s a major red flag. When you can’t be honest with people who love you about what is going on in your relationship, there’s a problem you’re not willing to address.

· Fear of expressing yourself

You’re not free to express yourself verbally or emotionally. If you’re too scared to express your hopes, dreams, needs and opinions. it’s another red flag. You can’t be yourself for fear of repercussions.

You’re constantly trying to keep peace at the expense of your own peace of mind. If you always sacrifice your own happiness, so they can be happy, you’re living with a toxic romantic partner.

Abusive language and behavior are commonplace. But if you’re being physically abused it’s time to get the hell out.

Your communication always leads to an argument and nothing is ever resolved.

You can admit the relationship holds you from being all you can be. Everything is centered on how they feel, never on how you feel. You are shown zero empathy and compassion, yet your partner feels entitled to it

· These words describe them

You can use the following terms to describe your partner: controlling, narcissistic, over jealous, manipulative, competitive, dependent, not supportive, needy or melodramatic.

WHAT CAN YOU DO?

You need to first take a look at yourself and how you’ve contributed to this mess of a relationship. Perhaps you believed you were doing the right thing and being the bigger, better person. It obviously didn’t work, did it?

Accept that your ways are not serving you, that they’re hurting the relationship instead. Make changes and make them now. Doing this differently is the first step you have to make. Quite often changing your own behavior becomes a catalyst in your partner then changing theirs.

9 thoughts on “Toxic Relationships for Soulmates and Twin Flames?”